On Friday frustrated nursery and primary school teachers at Gisimba Memorial Centre School refused to hand out end-of-term report cards in protest. Their complaint? Some teachers hadn’t received a salary for the last eight months while the lucky ones had gone ‘only’ two months without a paycheck.

One of the teachers, in an interview with The New Times aired his frustration. “Primary school teachers have not been paid for the last two months, while the nursery teachers have up to eight months in arrears. We cannot continue like this because it’s affecting our families,” complained Emmanuel Amani.

I can only feel his pain because I don’t know about the rest of you but if my salary did not reach my bank account by the first of every month, I’d become destitute in a matter of weeks. I wouldn’t be able to pay my rent, my utility bills, the house-help’s wages and groceries; in other words, I’d quickly become a homeless, starving professional. And that is no way to live. I’d be rigorously knocking on the finance department’s door if I went a week without my salary.

Interestingly enough, when asked for comment, the school sounded like the hurt party. Calling the teachers “undisciplined” and lacking “professional ethics”, the head of the school Dismas Gisimba wondered why they chose to deny the pupils their report cards. In his opinion, the teachers’ unpaid months didn’t warrant any action; they should continued being patient.

If this report was a ‘once in a blue moon’ kind of story I’d sympathise with the teachers and then move on. However, I’ve heard of this kind of thing too many times to count. Teachers, miners, builders, factory workers and yes, even journalists, often go for months without payment for their services.

In my opinion, the only reason the school was able to go so long without paying them was because the administration knew that it could take the teachers for granted. The question I must ask is, would the administration been so flippant if teachers had a union? A union that would have laid down tools months ago?

Elsewhere in the world, workers guilds and unions have the clout and power to not only influence

Presently, the labour and public service ministry is looking at increasing the national minimum wage that, if I’m not mistaken, is Rwf 100 per day. That is great. However, lets be honest with ourselves, whatever minimum wage that the ministry comes up with will be far from a ‘living wage’. And that is where unionized labour and collective bargaining comes in.

The vast majority of employers have one goal when it comes to their workers; to get the most possible out of them at the least possible cost. That is simply the way of the world and capitalism. To think that an individual worker can change that fact of life is simply a pipe dream. If they agitate for a change to the status quo, they can simply be let go and replaced without much fuss.

However, if the same individual goes to management with the full backing of fellow staff, a staff body that is willing to lay down their tools if their demands aren’t met, then it becomes a different matter. They can strike and then can picket, putting pressure on their employers. And even if work conditions and wages are great, a union can help guarantee that those conditions remain.

Our Constitution guarantees and protects worker’s right to unionise and strike, but until we actually act upon that right, we shouldn’t complain when we are treated with contempt and exploited. We must unionise and unionise now.

Last Wednesday a district courtroom in The Hague pulled a pin out of a diplomatic grenade and tossed it into the crowded peacekeeping ‘room’. The District Court ruled that the Dutch government was liable for the deaths of 300 Bosnian men and boys killed in Srebrenica by Serb forces.

Dutch UN peacekeepers watching Muslim refugee near Srebrenica, on 13 July 1995 Dutch troops were supposed to protect the refugees in the Srebrenica enclave

The ruling indicated that the Netherlands was responsible because the Dutch peacekeeping force, surrounded by superior Bosnian Serb forces led by General Ratko Mladic, had handed over the men and boys to the Serbs.

Relatives of those 300 victims will be able to seek compensation from the Dutch government after a two decade-long legal rigmarole. The story goes that in July 1995 the lightly armed peacekeepers, who were stationed Srebrenica, were overwhelmed by the Serb forces that then took control of the ‘safe’ area around the historic city. Retreating into their own compound, the UN troop soon found themselves taking care of about 30,000 people outside the compound and 5,000 within the compound. Asked by Gen. Mladic to remove the 5,000 from the compound or ‘else’, the Dutch heeded his nefarious request, knowing pretty well that they had signed the poor people’s death warrants.

Legal eagle Dr. Charity Wibabara, a close university classmate of mine, said it succinctly; “this is a 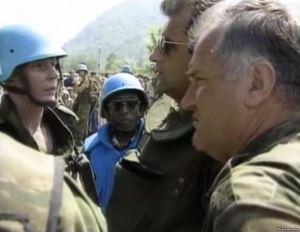 landmark case”. Not only because of its ramifications for past UN peacekeeping behavior but for future behavior as well. Right here at home, this case must be taken apart forensically by survivors of the ETO Kicukiro massacre. Nowhere else in Rwanda were the events so similar to those in Srebrenica.

For those who don’t know about the events in the ETO Kicukiro technical school, armed Belgian blue berets formed a well-guarded perimeter around the school, protecting 2000 Tutsis from hordes of machete-wielding Interhamwe. That is, until one fateful day when Belgian commanders decided that they’d had enough and withdrew the lifesaving troops. What followed could only be described as ‘hellish’.

I expect the good people at Ibuka, the Genocide survivors’ body, to employ the very same legal arguments that the Srebrenica families used to force the Belgian government to pay some form of restitution to the survivors of the massacre.

The Dutch case impacts Rwandans two-fold; firstly, it guides survivors on how to tackle the issue of Belgian liability and secondly, it will govern the way our peacekeepers operate in dicey foreign war zones.

Presently, Rwanda is the sixth biggest UN peacekeeping contributor with 4683 according to 2013 UN numbers. It follows Bangladesh, Pakistan, India, Ethiopian and Nigeria. The major difference between us and the rest of the top six is that our peacekeepers are in some of the worst places on earth, namely the Central African Republic and Darfur, Sudan. Our peacekeepers will one day invariably face a ‘Dutch-in- Srebrenica’ moment and with the Dutch ruling, I believe that they will have less leeway to act.

When I examine the Dutch action in Srebrenica, I don’t see any maliciousness on their part. The fact of the matter was that they were surrounded by an evil, better armed force probably willing to unleash hell on them if they didn’t do as they wished. They had two choices; either to give in or fight the superior forces. As military men, Dutch commanders chose to save their 400 or so troops (who were their real responsibility, if we are to be honest) instead of potentially getting into a firefight with the Serbs. And I honestly understood why they did so. It simply made military sense.

Using that logic, UN troops have a responsibility to stay and fight when civilians are at risk and they’re protecting them. Notwithstanding their potential lack of arms or troop numbers. So, where does this ruling leave the UN, and more especially our own peacekeepers?

First of all, it is up to us, as troop contributing nations, to ensure that our troops are armed to the teeth when they go on peacekeeping missions. And we must insist that we have a Security Council Chapter Seven mandate, allowing us to take aggressive action instead of staying on bases like sitting ducks. Because if we don’t insist on both things, we’ll put ourselves in a legal bind if our commanders take the kind of hard, military decision that the Dutch made 19 years ago.

This blog has been published by The New Times previously

Business came to a standstill in Nyabugogo, a Kigali business hub on Tuesday at around 11:15am when fire broke out at a complex that houses more than 10 businesses including a lodge and several wholesale outlets.

On Tuesday, I received a frantic text message declaring a ‘fire in Nyabugogo Taxi Park’. For a minute I thought I was suffering from a serious case of déjà vu because less than twenty-four hours previously, I had receieved another one informing me about a fire in Gikondo. Last week, I received yet another one telling me that shops in the Quartier Matheus were alight. I have been back home for exactly two weeks and its been three major blazes. I would laugh and say that I brought back some strange Chinese bad luck, but this is no laughing matter. Plus, Muhanga and Rubavu prisons suffered the same fate weeks before I got back.

The New Times has published articles detailing the issues that have arisen because of these fires such as the need fire insurance, improved electrical installation, a building code and the need for improved fire safety and prevention education.

For the longest time, whenever there was a fire, we’d simply blame it on faulty installations and power surges. We did so because it made sense. However, what is happening now isn’t making any sense at all.  Yes, many of our buildings probably have shoddy installation and they are a fire risk. However, buildings in Rwanda have ALWAYS had poor electrical installation; that is nothing new. Some people are blaming the dry season. Well, I’ve seen countless dry seasons but I’ve never seen so many building fires in such a short space of time.

It is my opinion that only arson can explain these recent fires. And there are two theories that might explain why arson is being used.

First of all, arsonists might be committing these crimes because they want insurance payouts. It happens elsewhere in the world and it wouldn’t be particularly shocking if the police found out that it was some sort insurance fraud.

I personally believe that it is something more nefarious than more insurance fraud going on in our fair city.

Last Thursday, while following the FDLR-RNC trail taking place at the Kanombe Military High Court, I came to learn that, according to the Prosecution, FDLR rebels were recruiting and training young Rwandan men and women in urban terrorism. The Prosecution submitted to the Court testimony alleging that Pelagie Nizeyimana, one of the 16 defendants, travelled to FDLR-controlled parts of East DRC, met up with an FDLR intelligence chief called ‘Alleluya’ and trained in the use of sub-machine guns, small arms, grenades and recruitment methods. END_OF_DOCUMENT_TOKEN_TO_BE_REPLACED

Its been a week since I came back from my academic sojourn to the land of Mao Zedong, panda bears and the Great Wall, and like I imagined, it is great to be home. There is nothing like the hills of Kigali, warm sunshine and, of course, a meal of beans and sweet potatoes, to reenergize you and make you feel like you have ‘properly’ left foreign lands.

Our war vets:Dignified and proud

While the jetlag took me out of commission for a few days, I was back to normal by Friday. And lo behold, it was Kwibohora Day! I watched the proceedings on Rwanda Television online; all I can say is that it was the best liberation celebration I’d ever witnessed. Not only because the president was in rare form but because of the military parade. And when I talk about the military parade, I mean the march of the wheel chair bound veterans. END_OF_DOCUMENT_TOKEN_TO_BE_REPLACED